How to prepare runner beans:

I've been asked many times how I prepare runner beans for the steamer and the table, so here is a little video showing the correct way to do it:
One thing I forgot to say on the video is 'you need a sharp knife'.
﻿ 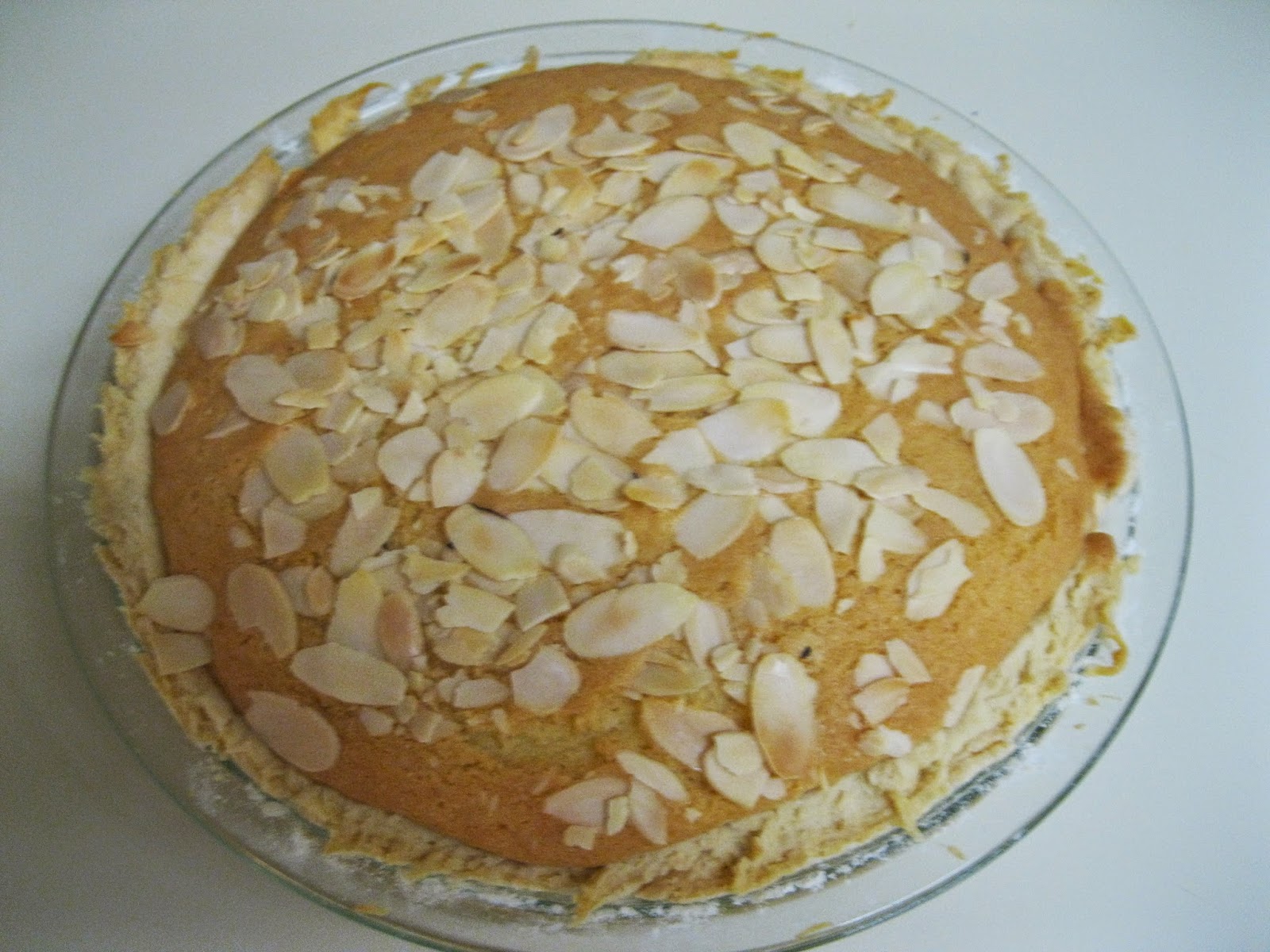 Monday is my baking day. This week I made a Bakewell Tart. It is basically a pastry base with a cakey filling on it, topped with flaked almonds. Very delicious with custard.

What makes it special is a layer of strawberry jam on top of the pastry and in the cakey mixture is a couple of ounces of powdered almonds. This makes the cake taste very nutty and moist.

This is an English dish. You can read more about it here.

This is Bakewell itself. It has a rich history. 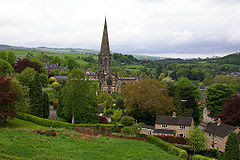 'Although there is evidence of earlier settlements in the area, Bakewell itself was probably founded in Anglo Saxon times, when Bakewell was in the Anglian kingdom of Mercia. Bakewell Parish Church, a Grade I listed building, was founded in 920 and has a 9th century cross in the churchyard. The present church was constructed in the 12th and 13th centuries but was virtually rebuilt in the 1840s by William Flockton.[2] By Norman times Bakewell had gained some importance—the town, and its church (having two priests) being mentioned in the Domesday Book.
A market was established in 1254, and Bakewell developed as a trading centre. The Grade I listed five-arched bridge over the River Wye at Bakewell was constructed in the 13th century, and is one of the few surviving remnants of this earlier period.[3] A chalybeate spring was discovered, and a bath house built in 1697. This led to an 18th century bid to develop Bakewell as a spa town, in the manner of Buxton. The construction of the Lumford Mill by Richard Arkwright in 1777 was followed by the rebuilding of much of the town in the 19th century.' 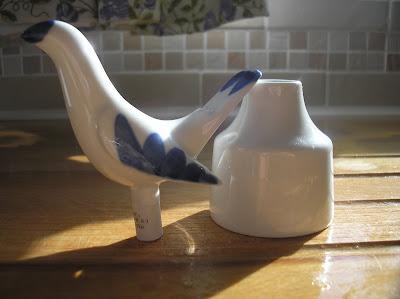 This pretty little porcelain bird is just waiting for a pie to sit on. 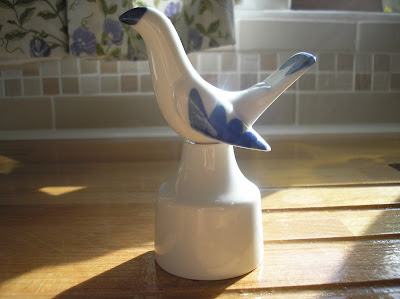 My father-in-law gave me the pie funnel many years ago and I've managed to keep it without breaking it thus far...

Here is a picture of the lardons I was talking about in a previous post... 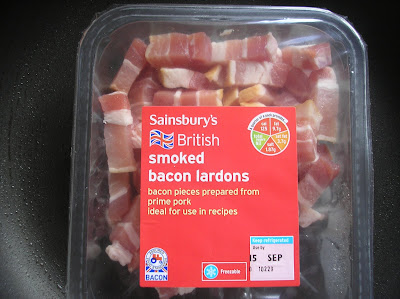 Here they are again, waiting to be cooked... 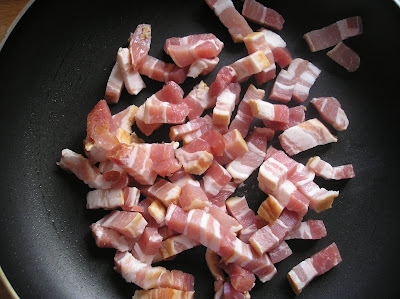 First I fry them off in their own fat. 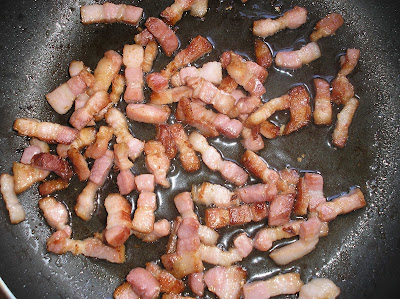 Then I mix them with some chopped up chicken which has already been cooked. 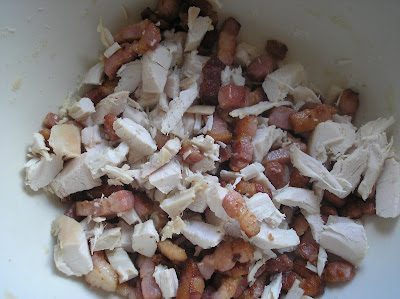 Next I add a tin of Campbells condensed mushroom soup. 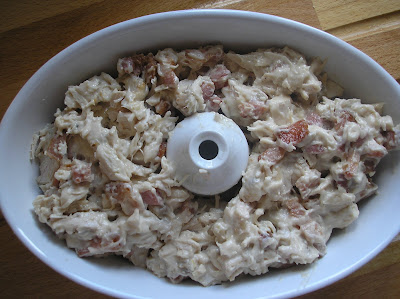 Put the mixture in a pie dish with the pie funnel in the middle.
The purpose of a pie funnel is to let the steam out of the pie while it is cooking. This prevents the pastry from going soggy.

Put a prepared pastry lid on top of the mixture, opening a breathing hold at the top of the funnel. 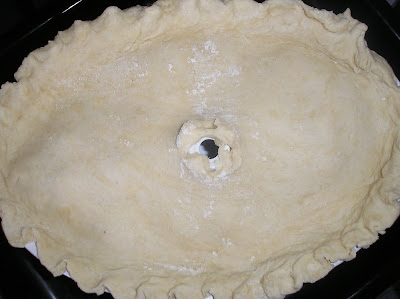 I painted the top of the pie with an egg wash and cooked the pie in a hot oven for half an hour. 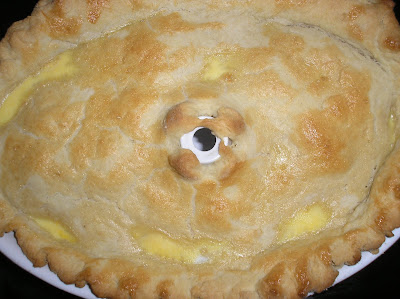 Once, ready to serve, I put the little bird on the top of the pie funnel and take the pie to the table where hungry people are waiting to eat it. 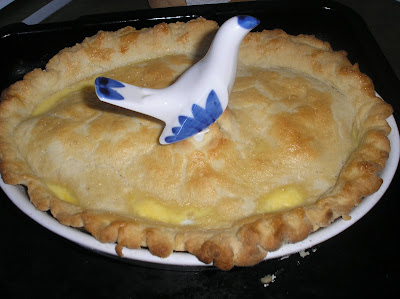 We ate it with new potatoes and mixed vegetables. 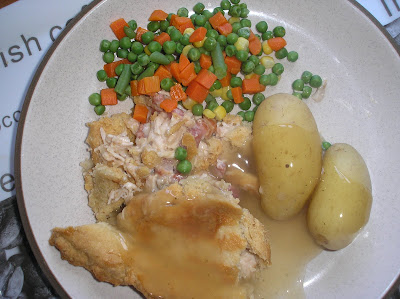 There wasn't much left afterwards! 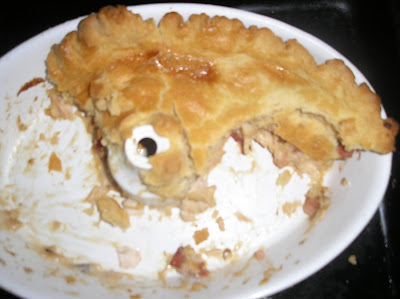 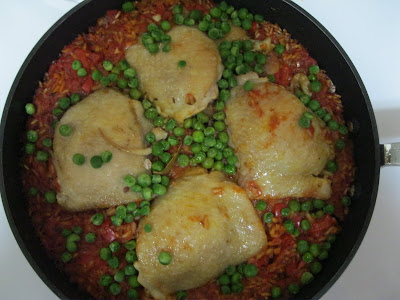 Last Christmas I bought Larry a cookery book with recipes for 'one pot cooking' in it. While I am in England, he is on his own here so I thought it would be easy for him to have a bit of inspiration now and then.

Larry freely admits that he isn't a cook, although if you look at the picture above, I'm not so sure. We have an on-going joke here that I don't drive and he doesn't cook and we both need to work on those failings!

Anyway, having practised the recipes in the book, last week he said he would cook one of them for me and give me a day off. Lovely.  This is the one he chose.  I'll give you the recipe below because it was very delicious and I want to share it with you.

Please note that the recipe calls for Saffron and as we all know, Saffron is veeerrry expensive.  He did use it but to be honest, I doubt if we'd notice the difference if it was left out. If I made it just for myself, I would leave out the garlic too but that's just my upbringing. I never had garlic until I was about forty years old.

So, without further ado, here is the recipe:

NB: the recipe given here calls for 8 chicken breasts, which will probably tell you that it is intended for 8 people. If there are less of you, then you will have to adapt the recipe or freeze the excess. That may be obvious to some people but not to others!

Method
1)  Preheat the oven to 350 deg. F (180 deg C).  Heat 1 tbsp of the oil in the casserole dish over high heat.  Add the chicken thighs and brown, turning once, about 5 minutes.  Transfer the chicken to a plate and set aside.

2)  Pour the remaining 1 tbsp oil to the casserole and reduce the heat to medium.  Add the onion and cook about 3 minutes, until softened.  Stir in the green and red peppers and garlic and cook for 5 minutes, until they soften.  Add the tomatoes, smoked paprika, thyme, oregano, and bay leaf, then stir in the rice.  Stir for 1-2 minutes.

3)  Crumble in the saffron if you are using it, then stir in the stock, tomato paste and lemon juice.  Season with salt and pepper.

4)  Return the chicken thighs to the casserole, nestling them in the rice.  Cover and bake for 15 minutes.  Add the peas and bake for 10 minutes more, or until the rice is tender and has completely absorbed the cooking liquid.  Serve immediately, while still hot.

This recipe comes from the book 'Everyday easy One-pot' and is based on content previously published in 'The Illustrated Kitchen Bible'.


I think we are lucky to have chicken so readily available these days.  When I was small, we only had it at Christmas time and it was considered a real delicacy.  We take so much for granted these days, don't we.

I expect you have your own version of this recipe. Does it appeal to you?  How would you change it if you were doing it for yourself or your family? 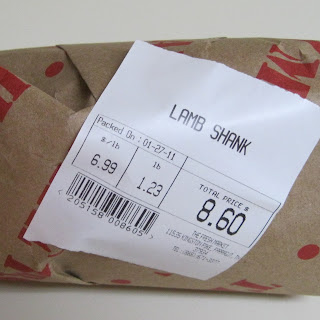 I love the meat in Freshmarket.  It's my favourite place for meat shopping.  This week I saw this lovely lamb shank  just begging to be bought... 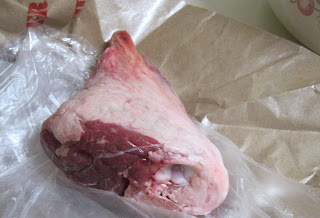 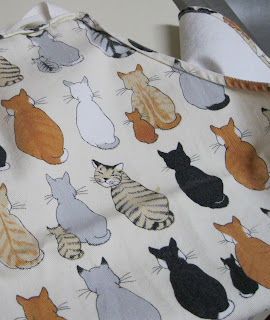 So here it is in the pot along with potatoes, carrots, onions and parsnips. I added some tomatoes and rosemary and let it bubble away for a couple of hours on the stove top. Just right for a cold day. 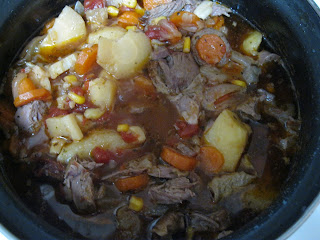 ...and to go with it? These delicious Grands biscuits (we call them scones in England). Perfect for soaking up the gravy. 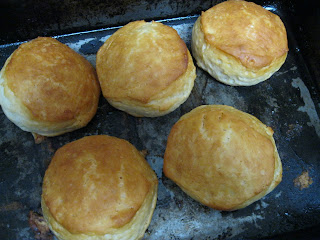 What's for dinner in your house today? 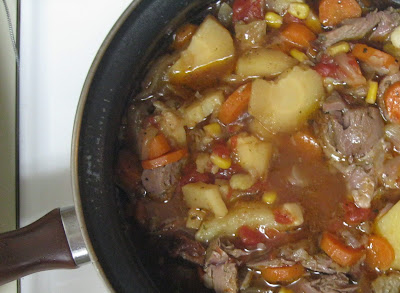