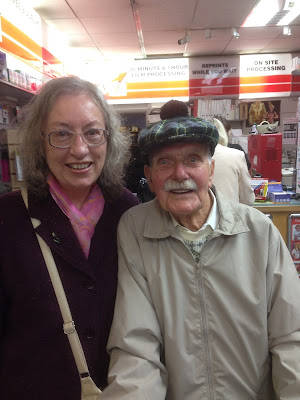 Recently Larry and I were shopping for a birthday present for David, my youngest son. We were in the camera shop. Standing at the counter was an old gentleman who was negotiating the best way to have a photograph from a book enlarged. The old gentleman looked familiar.

I walked up alongside of him so I could get a better look. Yes, I thought, it's definitely him, but still I wasn't quite sure.  After all, if it was who I thought it was, it must be 55 years since I saw him last! I touched him lightly on the arm and tentatively asked if he was Mr. W....... He turned to look at me and recognition filled his face. Yes it was my neighbour from when I was a child, growing up in a row of fourteen council houses, built by the council for their employees. I could hardly believe it! I quickly tried to work out how old he must be by adding and deducting years in my head. It dawned on me that he must be at least in his late nineties.

He told me he was 101. Amazing, totally amazing. There he was out shopping in the High Street, complete with shopping trolley and list of items required and he had arrived there on a bus and walked the rest of the way.

He looked so well and was totally 'with it'. I asked him about his son, who was roughly the same age as me and now well into his sixties. He was doing fine, Mr. W..... told me. When his 100th birthday had arrived, and his birthday card from the Queen had plopped through the door onto his doormat, his son and family had arranged a party for him. During the party, which they all enjoyed very much, photographs were taken and a keepsake book was made. One of the photographs had particularly appealed to Mr. W. so he was in the shop, discussing the enlargement of it.

He told me he still lived alone in the same house, right next door to where I lived as a girl and with a little help and a few adaptations to his home, he was managing well on his own.

Whilst we were chatting, Larry was looking at cameras and binoculars and we settled on the binoculars for my son. I believe he was very pleased with them. I interrupted the sale to ask Larry to take a photograph of Mr. W. and me for my own keepsake book! He obliged and this is the result. I was happy to see that my friend was still wearing a tam-o-shanter (hat) as a memory of his Scottish wife, Nancy.

Seeing Mr. W. again after so long revived a lot of memories for me. One of them concerns a blackbird who built his nest in a hedge which grew between our house and the house next door where Mr. W. and his wife and son lived.  My dad used to talk to Mr. W. through the hedge, often on Sunday mornings and one morning, whilst my dad was parting the branches a little bit so as to get the best view of his neighbour, the blackbird appeared from nowhere and dive bombed my dad in the back of his head, drawing blood and causing my dad to exclaim loudly.  No doubt the blackbird was protecting it's nest. It caused a lot of amusement with my mum and I as we tried hard not to laugh out loud at what had just happened.

Mr. W. worked for the council and rode a bicycle. I remember him riding his bicycle wherever he wanted to go. To my knowledge, he never owned a car.  Whilst other people were buying cars, learning to drive and making the road outside our houses ever more dangerous, Mr. W. continued to ride his bicycle everywhere.  A few years ago he had an accident. He was knocked off his bicycle by a motorist who had lost control of his vehicle. It mounted the pavement afterwards, narrowly missing other people, but Mr. W. was quite seriously hurt. His leg was broken - not a good think to happen when you are in your late nineties and he had to go to hospital and spend some time there.  Miraculously he recovered and apart from the fact that he now finds it difficult to get up the stairs in his house, he is back to almost full mobility. He certainly walks well as I noticed.

Time stood still in the camera shop as we remembered our past and the staff were most obliging.  Not one of them hurried us on or caused us to feel rushed.  When one gets to 101 surely one has earned the right to 'stop and smell the roses' for as long as it takes.

He truly is a remarkable man and it was such a pleasure to meet up with him again.