My Memoirs, My Little Nanna 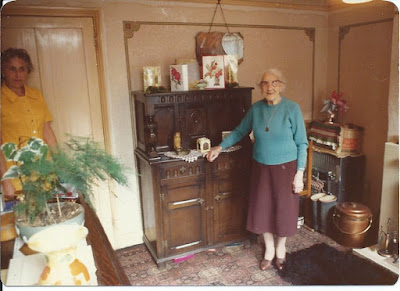 This is a picture of my little Nanna, Ethel Mills. She is in her nineties. Also in the picture, on the left, is my stepmother Ronda Mills, who died last year.

Every picture tells a story. I know the story of this one.  On the face of it is a little old lady, standing proudly beside a reproduction dresser, but there is much more to it than that.  This picture may end up in my scrapbook or perhaps inside a shoebox on the top of the wardrobe. When my children find it, after I am gone, they will not know who these people are, unless I tell their story. In My Memoirs, I am attempting to do just that because I would like them to know about the family. They may not be interested now, but in years to come, when their own lives are progressing past the half-way line, they may begin to wonder who went before them.

I wish I had more pictures of my Nanna.  We weren't really very close. I wish we had been, but due to the fact that my mother was not welcomed into the family, relationships became difficult for me to maintain and it was easier to just let things slide.

Ethel was born in 1882, the youngest of eleven children. She was born in St. Albans, Hertfordshire and lived there for quite a short while because when she was two, her father died and her mother took her to Luton together with one or two of her older siblings.  With such a large family, Ethel probably didn't know the eldest ones. They would have flown the nest already. Luton was a cheaper place to live in those days, as it is now and nearer to the work in the hat industry, which provided so many women of this generation a living. My Nanna was taught at an early age to trim hats and I remember her doing that many years later when I went to visit.  There were piles of hats in all corners of their tiny house and ribbons and cotton to trim them on the tables.

Ethel married Frederick Mills in 1905 and set up home in Luton. They had three children: my auntie Connie, my uncle Bert and my dad, who was the youngest.

So, back to the photo.  I think my dad took the photo. Whoever it was, they were standing in the doorway to the outside world.  The front door of this little house opened directly onto the street, no porch, no hallway, no front garden, straight out.

On the left is a sideboard, which I remember well. There used to be a big elephant on it with an Indian boy sitting on its back. As a child, I was fascinated by it, but I don't see it now.  I wonder where it went? A fern has replaced the elephant.

Behind the fern is my stepmother Ronda. My dad married her in Australia many years after he was divorced from my mother. She was a very nice lady who died last year. I was sorry not to be able to communicate with her anymore.

The door behind Ronda led to the back room by was of a tiny square of carpet with a cupboard at the side.  As a child I was a bit frightened of going from one room to the other because the cupboard had a dark, heavy velvet curtain in front of it and I always wondered what was behind that curtain. If there was a monster in that house, that is where it could be lurking!

On now to the reproduction dresser against which my Nanna is leaning.  My mother bought that dresser. She and dad had two of them. This is the smaller of the two, which stood in our dining room for many years. When my parents split up, my dad took the smaller dresser and deposited it in his mother's front room. My mother kept the larger dresser. I don't know if my Nanna wanted the dresser in her front room, but she housed it anyway and there it stood until it was moved to my auntie Connie's bungalow when nanna died.

The dresser remained in my auntie's house until she died and then I had it. It currently stands in my front room!

My Nanna lived in the tiny house all her married life and died there. She was 95 years old when she died. There was a front room and a back room and a scullery where my Nanna did her washing and where the family washed themselves in the sink.  There was no bathroom. I remember my dad standing at the sink, stripped to the waist, washing himself in yellow carbolic soap and singing at the top of his tenor voice. He loved to sing Richard Tauber's songs. The back door to the tiny yard was next to the sink. You could see the light coming through all around the edge because it was more like a shed door than a house door. He didn't seem to mind as the cold wind whistled through the gap.

Outside was a tiny cobbled yard which led down to a handkerchief sized patch of garden. The outside toilet was at the end of the scullery and next to the garden. There were three concrete steps leading up to the wooden door of the lavatory and a latch to shut it once inside. It was dark, cold and full of spiders. I hated going in there and only went in when needs must!

Upstairs were two bedrooms.  They were accessed by a very steep flight of stairs leading up from the middle room and once at the top it was necessary to step off the ladder straight into the bedroom, either to the left or the right.  I never went into either of the bedrooms.  I was too frightened of stepping off the ladder.

In his later years my Granddad Fred suffered terribly from rheumatoid arthritis. He was also gassed in World War 1. When he could no longer ascend the ladder, a bed was made up for him in the front room downstairs, where the dresser is standing in the photo.

The house has now been demolished and replaced with a small block of flats.

My mother was Dutch and to the English in the mid 1940's it sounded as if she had a German accent.  Consequently she had a hard time of it over here, where she came to marry my dad after the war.  They married in 1948. The family, according to my mum, did not show much of a welcome to her when she arrived.  I think they had already sorted someone out for my dad to marry and it wasn't his Dutch girlfriend. However, despite that and cultural differences the marriage lasted sixteen years and produced one daughter - me.

I wish I could have known my Nanna better. I'm sure we would have had a lot in common.
Posted by Stella Jones at 16:32 3 comments