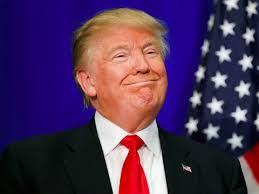 I've been reading your blogs over the past week and doing my own thinking too and I still can't get my head around Donald Trump being elected the next President of the U.S.

How did that happen?  Who are these people who voted for Trump?  Are they all mad as hatters?

Well, just like Brexit, it has happened and now we have to accept it and run with it!  I've written quite a bit about Brexit lately. You can read my posts here if you want to see what I've put. When I write blogs I don't usually expect that anyone will be particularly interested in what I put so most of what I write is for myself, like a diary, something I can look back on it  in years to come and enjoy or remember or whatever.  Some of it is for other people.

When I was in America I discovered that life over there is very different to what I am used to so I started writing about the differences, both for my England friends and for the American ones.So when all this election business was going on, I found it most interesting. My husband, who is American, assured me that Donald Trump would never win the election. He is a businessman after all. What does he know about running a country the size of America? He's never been elected to public office (but never mind, he can't be any worse than the others! or can he??) He's rich and America apparently worships RICH!? If someone is rich, they must be doing it right? Right? No, wrong. What could he possibly know about how the poor live? How the African Americans suffer, even today? How people struggle to afford health insurance? or choose between having the insurance or sending their son or daughters to college? But never mind, he's rich, he's a good example of how it's supposed to be.  Everyone can be like him, can't they? If not, why not? NO NO NO

He's got a very big learning curve to follow. Perhaps he'll have some good advisers.

The result of the election in America has been compared with Brexit over here, but in my opinion it is not the same thing at all. Yes, the world order is changing and we haven't seen all of it yet, but Brexit was about leaving the European Union, not electing a new President. Different all together.

So last Tuesday I woke early and put my I-pod buds in my ears. I didn't put on the radio because I didn't want to wake the rest of my expanding family. There are four of us in the house these days. I listened to Radio 4 from the BBC, which is a reliable source of news over here.  I could not believe my ears when I heard the news and had to go and tell Larry straight away. He hardly believed me. 'No', he said, 'All the results aren't in yet,' but the ones that remained to come in would not make any difference as it turned out.

My first thought was did Trump pay people to vote for him? That wouldn't surprise me. Second thought was more about acceptance. Then I got annoyed because I thought people were not voting for a woman. Poor Hillary - stuck under that glass ceiling again.

Now, a week on and Donald Trump is back-tracking on almost everything he said during the campaign.  Did that surprise me? No, of course not. After all he lied before, he's lying now and he will continue to lie and say whatever pops into his head in the future. We can all like it or lump it.

Just like during Brexit, the opinions have split the country.  Interestingly, mostly older people over here voted for Brexit whilst the younger ones wanted to stay in the E.U. but over there it was mostly the rural communities who voted for Trump and many younger people too.

So what if Donald Trump was saying all those outrageous things just to get votes? Is that fair? Is that the way to go about things these days? Does it matter? It matters to me, does it matter to you?