My Memoirs - Dad and his gun. 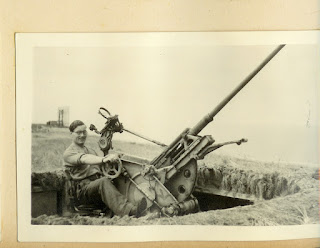 It's poppy day here today - the day we remember all the soldiers etc. who died whilst serving Great Britain in any of the wars we've been in back when. It's a time for thought, deep thought and for thinking about our loved ones.

The picture here today shows my dad, Fred Mills, with his gun, defending the coast of Holland, Noordwijk during World War 11.  I don't know when the picture was taken but I'm pleased to say that dad did not die in the war. He came back. When he came back he wasn't the same person who left. I think the wartime made him more unsettled, more adventurous than he would have been before he went.  He wanted to be a pharmacist but he became an engineer.  In the war he was a Royal Engineer.

One of my regrets in life is that I didn't ask him more about he time in the war. Maybe he didn't want to talk about it, but I didn't ask! I did listen when he chose to talk, but not enough and I feel guilty about that.

Now I am trying to find out more about what he did in the wartime. I know that he went to Noordwijk and he was stationed in my mother's house, which was right near the sea. He and several other 'Tommies' stayed there. That is where they met and after the war, my mother came over to England to get a break and they met up again.  My mother was only 17 when the war broke out so she spent the best years of her life under Nazi occupation and he must have been horrendous for her. She, herself, was very brave and fought for the Dutch resistance.

During today's Remembrance Service at the Cenotaph in London, the Queen was accompanied by the King of Holland, Willem Alexander and it brought a lump to my throat to see them there together. Queen Wilhelmina was exiled in England during the war years. The King was here today because Holland are celebrating 70 years of freedom from the Nazis.

So I wore my poppy with pride today and remembered the members of my family and others who fought for our freedom.

My dad, second from the left in the back row.  I wonder where all these men are now? Most of them dead I think, but did they all come home? Did they live happy lives? I wonder. 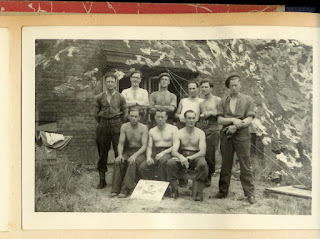