A Visit to Pevensey Castle 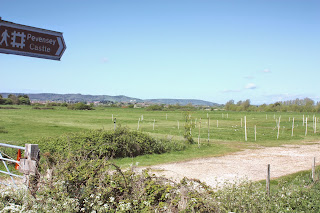 I’ve just got back from a trip to Eastbourne in Sussex with Larry. Eastbourne is  a delightful seaside town with a lot to offer especially for older people and those with disabilities.

The best day weatherwise was Wednesday so we decided to go to Pevensey and look at the castle there.  We caught the no. 99 bus from the pier, which took us all the way or so I thought.  I asked the driver to let us know where to get off for the castle, but he looked so vague, I didn’t think he knew what I was talking about so we decided to guess for ourselves.

I didn’t realise there were two Pevenseys, Pevensey Bay and Pevensey village and we got off the bus at the wrong one. The lady in the hotel had advised us beforehand to get off in the High Street, which would be near the castle so when I saw a High Street, I thought that would be it, but it wasn’t. It was the wrong High Street.

We decided to ask in the Estate Agent’s shop (realtor) for directions to the castle only I couldn’t resist telling her that we were interested in buying a castle before asking directions. She laughed and then gave us two options to get there. One way was to follow the path at the side of the main road. The other was to walk back through the village and pick up a country walk through the fields, leading directly to the castle walls. We opted for the field walk, which was about a mile, or so she said, but I had to explain to Larry that in England country miles can be a bit longer than town miles.


We walked back through the village until we saw the start of the country walk. We crossed the busy road and walked through the first stile. We could see the castle in the distance rising up like the fortress it used to be when it was first built in AD291! 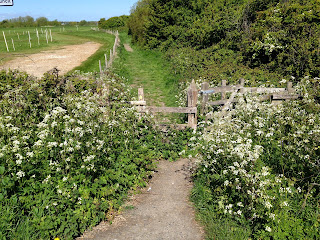 The walk was gorgeous, all green and quiet, but a bit bumpy because it wasn’t a proper path, more a country path worn through by walkers over many years.  A river ran beside the path and we could hear the water birds talking to each other and their babies and see the beautiful water lilies in their natural setting.

You can see the castle in the distance. Click pictures to enlarge. 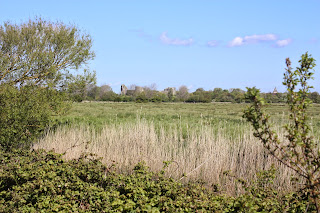 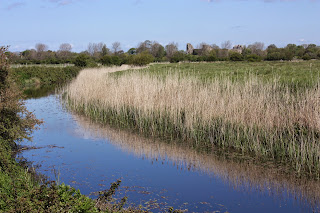 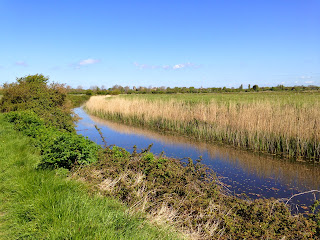 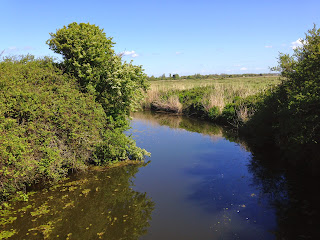 Soon we came to a little bridge over the river.  I stopped on it to take some photos. 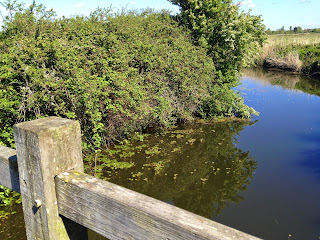 When I came down the small, wooden steps, one of them gave way and shot me forward, a bit like when you miscount the stairs on the way down and it really jerks the spine, doesn’t it. Larry was worried that I had sprained my ankle and that he would have to carry me back but I was ok and carried on regardless. We could see the castle getting slightly closer, but I could also see a small herd of cows looking at us.  I wondered if the cows were on our side of the river or the other side?  It soon became apparent from the number of cow pats we encountered that the cows were on our side! I just hoped there was no bull with them.  We decided not to look the cows in the eye, beautiful though they were and followed the trail across another field. The path was anything but straight. It followed the side of the river so I’m sure it was much longer than the one mile we were told it would be.

We clambered over two stiles. I was not dressed for a country walk. I had on a long, flowing skirt, but there was nothing for it but to press on and hope we made it in one piece.

A jogger came running across towards us from the left across a field full of rabbit droppings and cow pats. That was encouraging.  She must have got through from somewhere.  Then we saw a lady with a dog and I felt we must be nearly there. A train went by in front of us about 500 yards away and I realised that we would have to cross the railway lines.  There were two sets of lines and the sign said ‘Do not step on the live wire’! There were no overhead electricity lines so Larry surmised that the trains must be diesel, but when we got back yesterday and asked Jim, he said that many lines south of London had the same system as the underground trains, i.e. the live line is on the ground.

I was not at all keen to cross the lines, but we had no choice so I gathered up my long skirts and went for it, after checking for trains first of course.  Trouble is, the trains are so quiet, you have to rely on your eyes and they move so fast. Yipes, I’m not used to this! We crossed carefully but my heart was beating double quick, I can tell you and I made sure I stepped between the rails and not on them. Yesterday I also discovered that the live bit is deactivated over the crossing but I didn’t know that last Wednesday. I had wondered about the dogs. They can’t read, can they? It would be easy for them to tred on the live wire, with all their four legs.

Look closely at the next picture.  Can you see the bridge that leads to the castle? It's the only way in. 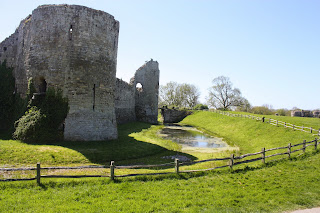 Just to prove I woz there! 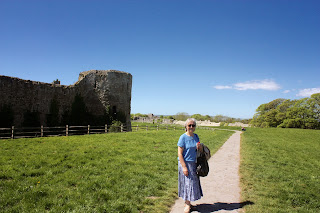 Once safely over the railway lines, we were close to the castle. Only one more small field to cross.  We skirted around the castle walls, looking for the entrance to the outer keep.  Finding a small car-park we sat down on a wooden bench for a well earned rest.

While we were sitting there, a local man came up to us and asked if we were there for the walk/ ‘No,’ I replied, ‘we’ve just had a walk.’ He had organised a local heritage walk and he was collecting customers to go with him only sadly, there wasn’t anybody only us and we were too tired for another hour’s hike.  I felt sorry for him but he seemed to think that trade would pick up in the summer. It is early days over here weatherwise yet. He then asked us if we had seen the pig on our walk. When I told him no, he explained that someone in the village had a pig, only it was a boar! And it could be aggressive.  Apparently it like to chase people on the walk we had just completed. I didn’t know whether to believe him or not, but visions of Larry running away from a big boar made me smile.

After our rest, we went inside the outer keep to look at the castle and take some photos.  I was surprised how big it all was and how much of it was left, considering it was built in AD291.  There was a large moat, which went all around and a bridge across the moat into the inner keep.  One of the reasons we went to the castle was for Larry to take some photos with his lovely camera, but unfortunately when it came to it, the bridge was the only way in and Larry couldn’t bring himself to go across it.  He said it was vertigo, but I think he has a phobia about bridges because there have been lots of incidents involving bridges when he has been unable to cross.  In any case, I went in and took some pictures with my phone. Unfortunately it doesn’t zoom. Larry got some better pictures of the outside. 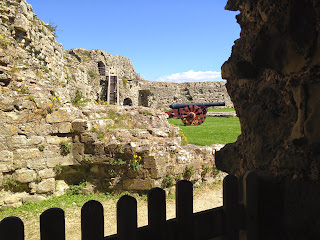 It's a great place for children, with a cannon to climb on and ladders to ascend. There are lots of nooks and crannies to hide it, but you have to be careful because it is very old and some of it looks a bit dangerous. 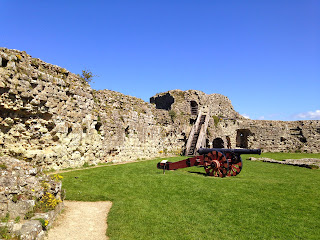 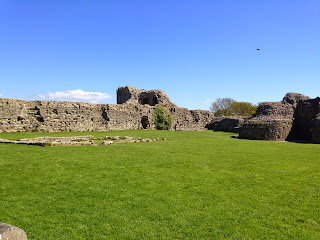 Click on the next picture to see the pile of cannon balls. 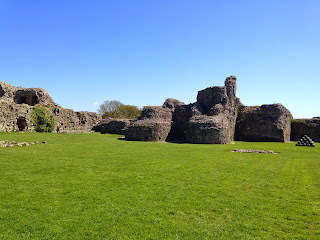 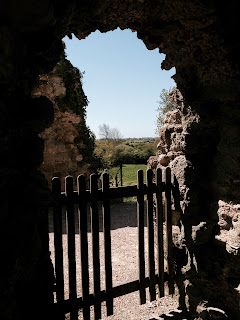 Look closely at the next picture and you can see the outer wall of the castle in the distance on the left hand side. The castle is enormous when you are standing next to it or in it! 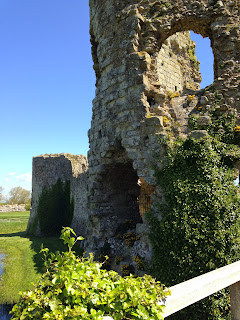 This is the moat from the bridge. It was a long way down. 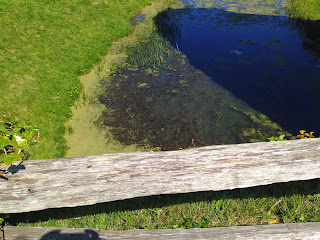 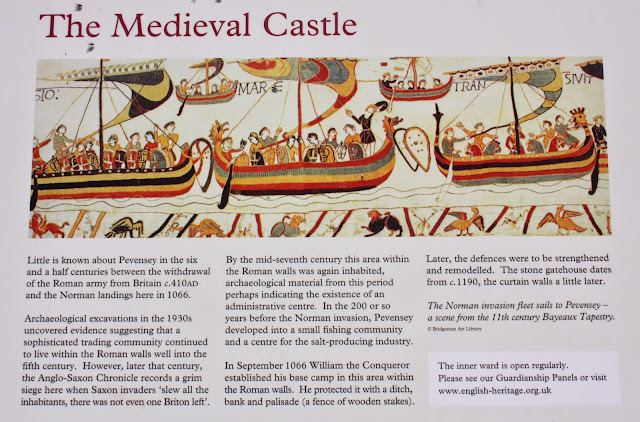 You can read more about it here.

This picture shows a better view of the outer wall. 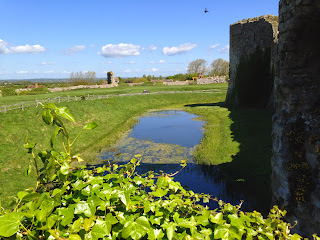 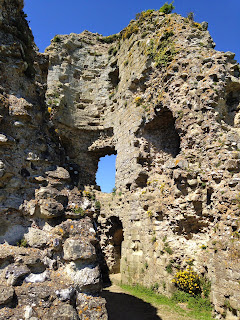 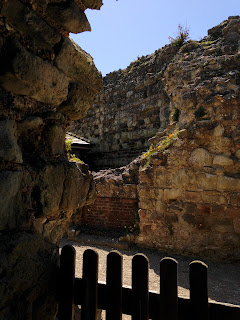 We had a pub lunch, which was very welcome and then walked back through the village to catch the bus back to Eastbourne.

It was a very interesting day out, one which I will remember for a long time.