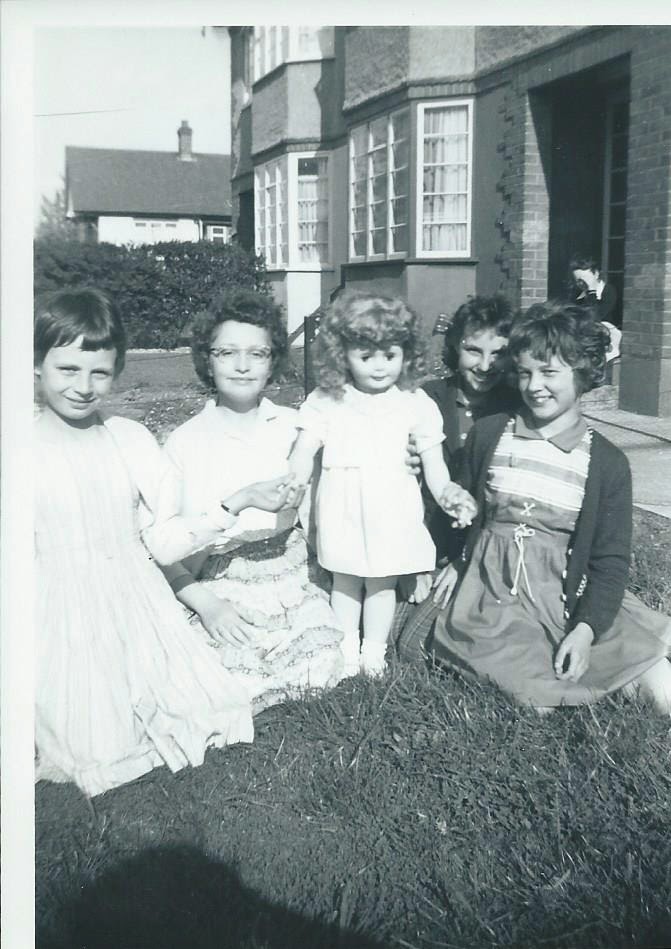 This is a picture taken in approximately 1961 when I was ten. From left to right are: Sheila Parker, me, my big doll, Julie and Suzanne and in the background, shielding her eyes from the sun is my neighbour, Trudy who was about two years older than the rest of us here.

We are in the front garden of my house in Lime Avenue and the picture was taken in honour of my big doll, who had just been refurbished. I came by that doll through my mother's job. At the time she was working in a children's home for girls. There were eleven of them in the home and they had arrived there through unfortunate family circumstances. They had many toys but not enough love and sometimes this manifested itself in the destruction of the toys in their possession.  I am sure the staff did what they could, but only as time permitted and there was never enough love to go around. I on the other hand was an only child, given plenty of love but suffering from the fact that my parents didn't get on and were always arguing and sometimes fighting. This was a particularly trying time in my life because my mother had just started a divorce with my father on the grounds of cruelty. Looking at the picture above, it is hard to believe that so much was going on in the background of our smiles.

In just one year on from when the picture was taken, my parents would be divorced, my father would leave the house to return to his family home temporarily and my mother and I would be asked to leave our home because it was a Council House and we only rented it. Since mother and I were both of the same sex, we had to leave in order for the house to be allocated to a larger family. Had I been a boy we could have stayed. That's another story for another day...

Getting back to the doll; my mother, who was a domestic help in the children's home, found the doll in pieces in the boiler room in the basement.  It had been put there to be destroyed, burned in the big furnace as a broken remnant of sadness. I expect my mother felt sorry for it. At the time, those dolls were very expensive to buy and way beyond the purse of most people. I expect it had been donated to the home by a business or a wealthy organisation, but it had ended up in pieces, discarded.  My mother brought it home for me. I expect she felt guilty about that but the alternative was unthinkable and presumably the home were not prepared to have it mended.

I remember the day we took the doll on the bus to the dolls' hospital to be 'fixed'. I was embarrassed to be carrying such a large doll on the bus and mother and I got lots of funny looks because the doll did look so real, at the time. Nowadays there are 'reborn' dolls which look even more real but back then the doll looked as real as could be. The doll was put back together. I think mother had to buy a new leg or arm. I can't quite remember, but in the fullness of time, we went to fetch it and bring it home. Mother decided to buy her a pair of shoes. No dolls shoes would fit so we took her to the shoe shop and she had a pair of real, cheap shoes. Then she came home, taking up a large part of my bedroom, but I was pleased to have her and all my friends were really jealous, I expect.

To mark the occasion, the picture was taken and that is why I am looking so proud of my new acquisition. She remained with me for many years until I passed her on to my niece for her to enjoy. My niece is now a mother of her own with two little girls so I expect my doll is still being loved and admired. She was definitely worth keeping.