I took my computer into PC World to see if I could have some more memory put into it but sadly NO was the answer.  It is a Laptop and the maximum it can have, in terms of RAM (Random Access Memory) is 2 GB's. It is only two year's old!  I looked at the new computers, which all seemed to have at least 8 GB's of R.A.M. in them and noted the prices!!! To get a good one costs £699 or $1117.33.

I was hoping my computer would last four years but now I know it won't. It is almost obsolete already and that is why it is so slow. Two year's ago it cost £400 and I've had the use of it for two years.  At that rate it must be cheaper to rent!

While I was in the shop, looking at all the new products, the man in the clinic, who was ever so helpful, I might add, made some changes to my computer to make it work faster.

He deleted the two other user accounts I had on there.  That means that the programmes load faster because they only have to load in one place.

He altered some of the start-up programmes. I don't need every programme I've got to load on start-up. To do that he had to go into an area of the computer which he said I'd better keep out of. I agree.

Since I had a Mastercare agreement, which runs till October 13th, it didn't cost me anything. If he had been able to add more memory, then I would have had to pay for the memory but not the installation, which I thought was fair.

When I got home I moved all my photos and music onto my external hard-drive, which helped a lot. I also deleted a large graphic's programme, which is obviously too big for this machine to handle.

I know that you mac users out there are thinking 'why doesn't she just go and buy a Mac but the trouble is, if I do that I will have to buy all new software too, won't I. The Apple macs are very expensive too,  Perhaps if I was starting out new and was a lot younger, I would buy an Apple but for me, perhaps not!  Also I know that there are a few problems with updated the operating system on macs.

I deleted I-Tunes.  That is a massive programme and I can do without it.  I shall just use the Windows Media Player from now on and buy my CD's from Amazon.

I'm telling you all this in the hope that the information will be helpful to anyone who is experiencing the same problems as me.  I am very sad that my computer is obsolete and determined to make it last a bit longer. The fault is really with the software programmes and the size of them!  The manufacturers think that the more complicated the programmes are, the more they will sell.  Well, let me tell them that that is not true. Simple is best and I wish we could go back to the way it was. Microsoft is a big culprit.  Word and Excel are now so huge and complicated that you need to be a professor to understand them.  All that most of us wants is an easy-to-use, quick to load programme that doesn't cost the earth.

So my conclusions are:

If you are just starting out - buy an Apple Mac.
If you are buying a computer, look into renting one.
Maybe choose an I-pad instead but that's another subject.
Don't put too many programmes or photos or music on it.
Use an external hard-drive for storage leaving the computer itself free of garbage.
Keep the start-up menu clear.
Only have one user on the computer.

What do you think?
Posted by Stella Jones at 11:59 9 comments 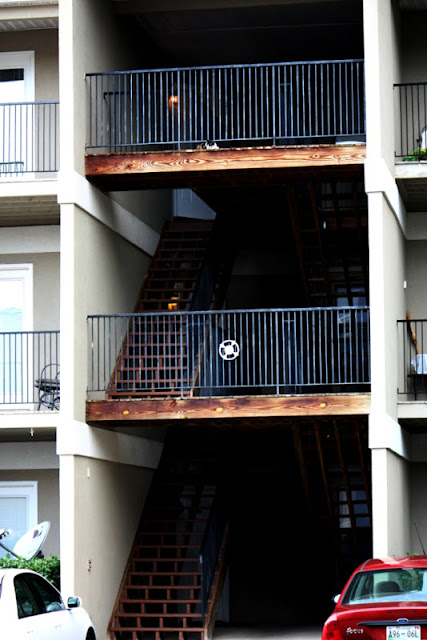 The picture above shows my American cat, Millie. You can just about see her.  She's on the top floor of the apartment block opposite, peeking out from under the railing.  Obviously she is not afraid of heights! Brave isn't she!

When I logged on to this Blog this morning, I noticed that there was a different background picture.  Why, who knows? I didn't put it there.  I have now changed it back to what I thought was there in the first place. Do any of you have that problem?

I have also tried to change my profile picture to something more up to date, but so far it won't let me. Some days I can post pictures on here, some days I can't.  Most odd. I have not upgraded yet but I think I might do so soonish. I feel more comfortable over here than on Wordpress and it's hard to say why really.  It could have something to do with the backgrounds over there.  They are very 'professional' sort of, if you know what I mean.  They are more for photographers and chefs and business people.  Perhaps over here is more homely and friendly?  Perhaps it's me.

I am currently looking into upgrading the R.A.M on my laptop PC. I made enquiries this morning about upgrading through my CoverPlan with Mastercare and I was told that  it was covered but I would have to take the computer into my local PC World Store, which luckily is not too far away.  I was given the telephone number of the clinic (for PC's), but when I tried to ring it, no-one answered.  Perhaps they don't work on Mondays? I'll try again later and maybe get some joy.

I can't say I'm looking forward to being without it but hopefully it won't be for too long and I do have an (unreliable) spare laptop.  However, it will need to do so many updates that I probably won't be able to use it for three days!

I currently have 2 GB's of R.A.M. and I'm hoping to double it.  What do you people have on yours? and what are your experiences of upgrading?