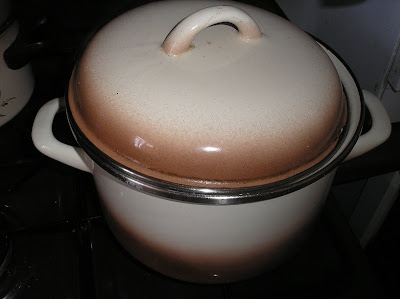 So what's in the pot? Can you guess?
This is a recipe very local... It's called Bedfordshire Clangers.
Here they are cooking............
Two little beauties boiling in their muslin parcels. 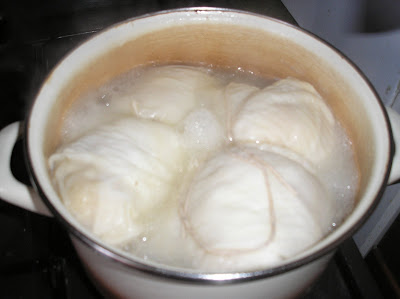 Every 40 minutes I have to top up the water, so I set the alarm so I don't forget. Don't want the puddings to go dry. 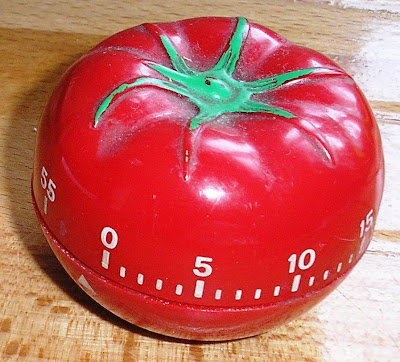 After 2 hours boiling, I take them out of the pan, using the string rope so I don't burn my fingers and set them aside to cool a bit. 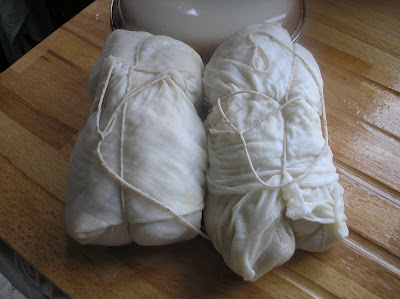 Where the string meets in the middle, the pudding will divide naturally. So I will have four puddings all together or two for greedy people. Traditionally there would be meat at one end and jam at the other but I have only meat and onion in mine today. The idea was that you started up one end with the meat, gravy added and then you worked your way down to the jam end which you would eat with custard.
I served mine with mashed swede this time. My son and I love mashed swede with butter in. 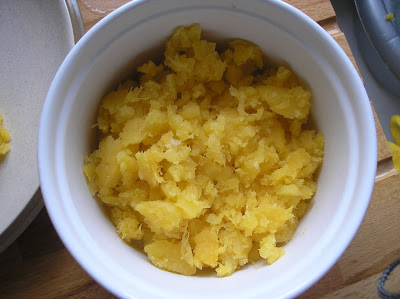 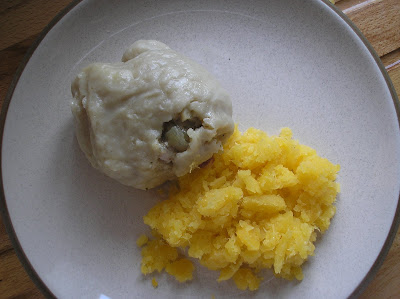 It's advisable to open the dumpling up as soon as possible to let the steam out so it can cool down a bit. We like to pour HP sauce over it. American equivalent would be steak sauce but it's not the same. HP sauce is available in Fresh Market. 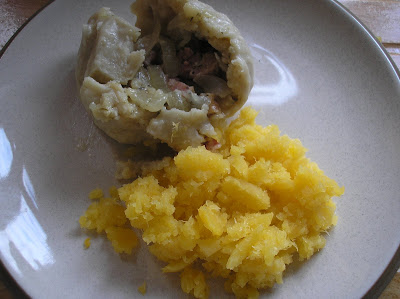 After all that cooking and eating, it's time for a mug of tea to wash it all down and maybe a snooze. 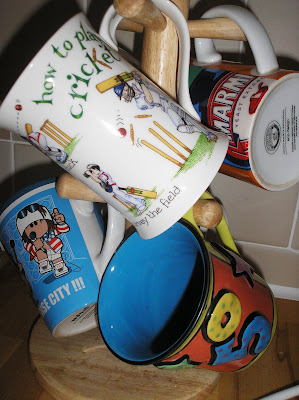 The main ingredients are as follows:
1 lb of self raising flour
8 ozs of suet
cold water to make the dough
a pinch of sale
one onion, chopped
a packet of lardons, added to the onion
some fresh herbs to taste
Method:
Make up the dough by adding the suet to the flour in a large bowl. Add the water until the dough is pliable (you can roll it out)
Roll out four circles.
Cook the onions and add the lardons.
Put herbs in with the ingredients, either in the meat or in the pastry.
Put the mixture in the centre of the circle and close the dumpling up.
Roll it into the muslin square.
Hint: If you flour the muslin square first, it will seal the dumpling as soon as you lower it into the boiling water.
When you have the dumplings tied up, leave one end of string dangling so you can grab it later on and lower the dumplings into the water.
Get it back to boiling and put the lid on, half cock.
Keep the water topped up and the pot boiling for two hours.
Good luck if you want to try it.
It's not for the squeamish and it is very high in cholesterol BUT
it is very delicious!
Star
Posted by Stella Jones at 18:49 8 comments